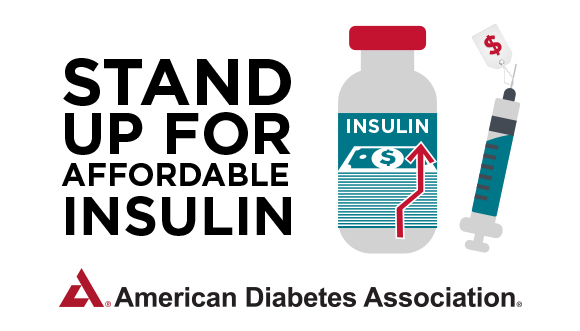 Insulin isn’t a luxury; it’s a necessity to preserve life and health. Yet the cost of insulin is increasing at an alarming rate. It’s time for change, and that’s why the American Diabetes Association wants you to join us in calling for action. Add your name to the petition and tell:

The full petition – and our Board's resolution:
WHEREAS, people with diabetes who use insulin need this medication every day of their lives in order to live;

WHEREAS, health care providers work with people who use insulin to determine the types and quantities of insulin necessary to successfully manage their diabetes and  to reduce long- and short-term health consequences, including blindness, amputation, kidney failure, heart attack, stroke, and death;

WHEREAS, the annual cost of diabetes, gestational diabetes and prediabetes in the United States skyrocketed to $322 billion in 2012, a 48 percent increase in just five years;

WHEREAS, the cost of insulin has risen steadily and steeply, creating financial hardships for individuals who rely on it to survive, particularly those who are uninsured or underinsured;

WHEREAS, between 2002 and 2013 the average price of insulin nearly tripled;

WHEREAS, insulin is frequently cited as one of the most expensive categories of drugs by private and government health care payers, with  insulin leading the list of price hikes for non-generic drugs in a recent government report on Medicare spending;

WHEREAS, insulin pricing is driven by a complex supply chain consisting of many players including manufacturers, wholesalers, pharmacy benefit managers (PBMs), insurers and pharmacies

WHEREAS, in much of Europe, insulin costs about a sixth of what it does in the United States; and

WHEREAS, the increased cost of insulin has resulted in a growing number of  people with diabetes telling their health care providers they are unable to afford the insulin prescribed for them, thus exposing them to serious long and short term health consequences; and

Therefore I join with the American Diabetes Association and:

Sign the petition. Then, spread the word for others to join through the options below:

Stop Diabetes is the Association's movement to end the devastating toll that diabetes takes on the lives of millions of individuals and families across our nation. Join the Millions® in the Movement. Together we can Stop Diabetes®.